Brokenness is the consciousness that we are not whole. Sin broke us apart, yet grace is what is holding us. We can never achieve  wholeness unless we are conscious of the presence of God moment by moment.

When God holds us , we are whole again. This is the wholeness or true holiness. It is not the 'stainless steel' righteousness that others are trying to achieve.
Posted by Adonis Cayabyab Caguioa at 10:48 PM No comments: Links to this post

We all have enjoyed watching 007 movies wherein the identity of the agent is kept secret as he freely moves around the enemy's territory or community. The identity remains to be secret until the mission is done. Sometimes the plot allows him to be caught in a fight, which gives us the conflict of the story.However a climax of victory is mostly assured before the story ends.

Sometimes, as Christians, we act like a "secret agent" in the community where we live. Our church seems to be an intelligence HQ working undercover. Neighbors do not even know that a church exists near them, because it disguises as foundation, educational institution and others.

This is one of the reasons why people are looking for God in wrong places. Finding solutions to problems by other means. Why would people consult a "faith healer " or "quack doctor" when a family member is sick? Because Christians are hiding. If only one will have the courage to declare: "My God heals and I can pray for the healing of your sick child", and have the faith to actually pray, less people will consult faith healers and more people will trust God for healing and wonderful things will happen.

Our calling as Christians is to be an Ambassador of the Kingdom of God. When an emissary enters a country , he identifies himself as a representative of a foreign government offering peace and diplomatic relationships. He does not work secretly but he becomes a public figure in that country, not his own. He works within the culture while maintaining his own culture and identity.

We are ambassadors of the Kingdom of God. We are in union with the Father, Son and Holy Spirit. When we see any person , we have the opportunity then and there to let then experience our fellowship/communion/relationship with the Trinity.We can let them know that they too can participate in that life that we are enjoying. They can celebrate with the Great  Dance because they are accepted and included.just like us.

Are you a Secret Agent or Ambassador? It is time to be what you really are called for....
Posted by Adonis Cayabyab Caguioa at 6:16 AM 1 comment: Links to this post

Among preachers, they usually want to emphasize the centrality of the Cross - by that, it means Christ died for you and me.

Yes - the suffering and death of  Jesus is of utmost importance. Paul even described it "... as of first importance... that Christ died for our sins." 1 Corinthians 5:3

Yet, Jesus' death is not the complete story . It is just a part of a whole.

During the 31- years life of Christ, was His death the only act that He ever did for you and me?

For many years, I thought I already heard the complete good news - That Jesus died for me. I was surprised , when right from the pages of the Bible, I discovered also that Jesus was born for me. He was baptized for me, He believed for me. He lived His life for me. He suffered for me.He died for me, resurrected for me, and ascended for me.

WOW... that is much more than what I was told. The gospel is not only about His death but includes His birth, life, resurrection, ascension and even His presence in our midst right now. It is not only His acts but His "being' Who Jesus is - the God/Man who is our vicarious substitute and representative. He assumes our humanity. When He died, we died, He lived his life for us. When  He died , we died, when He was raised , we were raised. ( Ephesians 2:5-6)


Posted by Adonis Cayabyab Caguioa at 11:34 PM No comments: Links to this post

Reason for having Happy New Year...

As 2012 starts, we feel that we are now older than last year!
Though, in our humanity, we let ourselves be affected by time, yet in eternity time as no effect. In fact, it is even timeless.
There are many reasons to be inspired and face this new year with faith. BUT our greatest joy is in knowing that we are not far from God. We are in communion with the Father, Son and Holy Spirit.
Again, there is no need for us to call on God as if he is not with us. We just need to reflect:

- Who keeps us safe the past year?
- Who gives us good health?
- Who loves us dearly?
- Who unites our family?
- Who put is our heart our enjoyment of sunrise and sunset?

The lists of questions may be endless but the same answer: The Father, Son and Holy Spirit did all and will do it again in our lives this 2012.

Our Lord Jesus Christ loves us, likes us, embraces us and includes into the communion of the Father, Son and Holy Spirit. That's the reason for having a Happy New Year.!
Posted by Adonis Cayabyab Caguioa at 10:43 PM No comments: Links to this post

You Pray Because You are Connected ...

Look at your cell phone. I am sure you have a SIGNAL of the Network you have chosen to subscribed. If you are recieving the signal - you are connected!

NOW... look at the names of people in your phonebook. I am sure all of these people also have signals in their cellphones.

The reality which seems not obvious is that OBJECTIVELY you are already connected to every person registered in your phonebook, but SUBJECTIVELY you need to call each of them for you to be able to relate.

By our UNION with our Lord Jesus Christ we are objectively connected to the Father, Son and Holy Spirit. All humanity has the signal. That is why we can Pray with confidence and faith that God hears our prayers always. Our prayers need not travel a long distance to reach God's throne in a far heaven.

Moreover we Pray because we are connected not because we were cut off from God because of our sins and we need to pray so that we will be connected again.

Thank God our connection is IN Christ... it is therefore permanent not on and off . Our connection does not depend on us or on what we do or do not do.
Posted by Adonis Cayabyab Caguioa at 10:05 PM No comments: Links to this post

Email ThisBlogThis!Share to TwitterShare to FacebookShare to Pinterest
Labels: Prayer

In the last post we have seen that there was NO eternal decree that God will choose to saved some and roasts others to hell. So, what was/is the mind of God in the beginning? Why did He create humanity?

There was a Plan - that is ADOPTION

For all eternity even before the foundation of the world, the Father, Son and Holy Spirit are enjoying and savoring the sweetness of an eternal communion. They want to INCLUDE "others" into that relationship.
But who could that "others" be? Angels? Animals? Plants?

Then God said " Let Us make man in our image, according to our likeness..." Genesis 1:26

Of all His creation... God created man after His own image so that humanity could enter or participate or be included into the fellowship of the Father, the Son and the Holy Spirit.

"He PREDESTINED us to adoption through Jesus Christ to Himself according to the kind intention of His will." Ephesians 1:5

HOW will Jesus Christ do it?   Is it some act that he will do? or does it have something to do with Jesus person and being?

The answer is it happens through Jesus by his INCARNATION.   Our being adopted is because of the PERSON and BEING of Christ. He is both God and Man. In him all humanity is vicariously represented and substituted. He came for us to unite us in Him. He came for our adoption.

Most people fail to understand this because the look only on the Work of Christ , at what He did on the cross . They must really see WHO JESUS IS. As God -Man as the Second Adam that in His Person and Being - We are included in his relationship and communion to the His Father and the Holy Spirit.
Posted by Adonis Cayabyab Caguioa at 6:58 PM No comments: Links to this post

Email ThisBlogThis!Share to TwitterShare to FacebookShare to Pinterest
Labels: Gospel

There is NO Divine Decree

There is NO Divine Decree before the foundation of the world - that some people will believe while others will be lost.

If such decree exists , it would make Christ death on the cross unnecessary because even if he did not die, some were decreed to be saved anyway.

Such decree was only a product of deductive thinking and logic of some people.

That might be a very good reasoning and logic. The problem is, it is not Biblical and it is wrong theologically. People who believe this way may be sincere ... and sincerely wrong.

It is sad when people claims to believe in God's sovereignty when they are actually believing in the superiority of their thinking not recognizing the true identity of God as Trinity and not knowing Jesus Christ as the Second Adam that reversed the effect of the fall in the life of humanity.

What logic can refute the following explicit verses from the Bible:

These passages make it plain that Jesus died for all humanity. The Bible is very clear .
ONLY the twisted logic and reasoning of man will interpret those verses to mean something, it does not mean.
Posted by Adonis Cayabyab Caguioa at 6:06 AM No comments: Links to this post 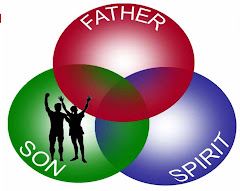 Why Included By Grace?

God is a Trinity. For all eternity the Father, Son and Holy Spirit enjoys a communion. There is a relationship among them. The Father always loves the Son. The Son always loves His Father in the communion of the Holy Spirit. Then the Trinity created humanity to be adopted into their divine communion/fellowship.For that to happened, the Word/Son comes down and dwells among us.Through the incarnation ,humanity and divinity is connected... we are adopted in Christ..that is why YOU are INCLUDED by GRACE...

Viewers of Included by Grace